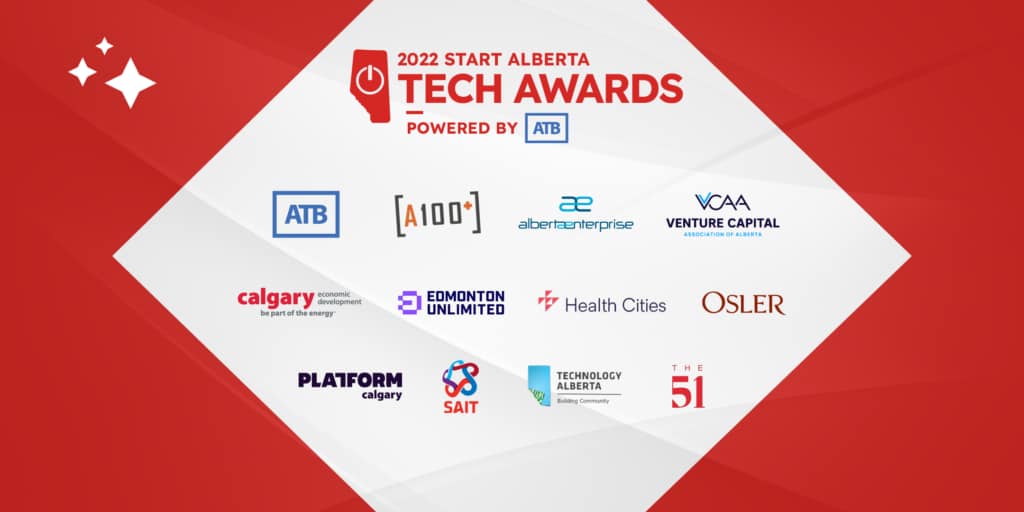 We’re thrilled to wrap up the 5th annual Start Alberta Tech Awards. Thanks to our committed sponsors, there were 10 award categories this year to honour the individuals and organizations with standout contributions to Alberta’s tech industry.

The Awards Ceremony powered by ATB took place on November 17, 2022 at The GRAND Theatre in Calgary. It was an incredible evening that celebrated the significant impact and achievements of Alberta’s tech sector.

Here’s a recap of the 2022 winners – congratulations to each of you!

Awarded to a tech company that has developed and fostered digital talent to accelerate innovation and diversification in Alberta.

IncluCity is transforming what it means to be included in tech by doing something different:  usability testing with a model of inclusion. IncluCity works with local communities and connects them with diverse and often under-represented testers to improve the usability and services of the technology that’s emerging in Alberta.

Awarded to an organization known for its dedication to helping start-ups, scale-ups, and entrepreneurs grow in Alberta.

Alberta IoT is a Calgary-based not-for-profit dedicated to establishing Alberta as a worldwide leader in IoT technology. Alberta IoT focuses on scale-up IoT and emerging technology companies with programs that support growth and expansion both in Canada and internationally. Its newest program, The Virtual Science Park, matches enterprises, post-secondaries, labs, researchers, with subject matter experts to consider challenges and engage in solutions.

Presented to an individual or investment firm that has displayed the best investment acumen over the last year in Alberta’s tech sector.

Presented to a dynamic early-stage founder recognized for their coachability, community involvement and ability to launch a technology-focused company in Alberta.

Julian Mulia Goycoolea is the COO and Co-Founder of NanoTess. The early-stage health tech company has developed an innovative material technology that can heal diabetic wounds. A chemical and software engineer by trade, Julian also provides pro bono consulting to multiple startups and not-for-profits.

Recognizes an innovative tech company committed to Environmental, Social, and Governance (ESG) standards, such as through its products and services.

PurposeMed is re-imagining how healthcare works by improving access to care for marginalized and vulnerable populations in Canada. PurposeMed has launched two unique brands: Freddie, the largest and highest-rated HIV prevention service in Canada; and Frida, a fast and affordable diagnosis and treatment for adult ADHD.

Presented to a tech company that has had the most significant acquisition or exit.

Circle Cardiovascular Imaging was acquired by private equity firm Thoma Bravo for US$213M in March this year.  Founded in 2007 in Calgary, Circle builds and sells imaging software that is being used by cardiologists and radiologists around the world to examine sick hearts.  The acquisition is expected to drive future investment in product innovation, extend Circle’s market leadership position, and fuel future growth.

Awarded to an individual that has gone above and beyond for the venture capital and technology ecosystems in Alberta.

Shawn Abbott is a Partner and co-founder of Inovia Capital and an active member of the Alberta tech community. He contributes extensive experience as a coach and advisor to portfolio companies in Alberta including Symend. Shawn also mentors founders through CETAC-WEST and Venture Mentoring Services of Alberta.

Awarded to an early-stage company that is voted by A100 members as “most likely to succeed”.

NanoTess is a Calgary-based health tech company with a vision to improve quality of life through nanotechnology, starting with chronic wounds. Founded by Megan Leslie and Julian Mulia Goycoolea in 2020, NanoTess has developed an innovative material technology that can heal diabetic wounds.

Awarded to a forward-thinking woman recognized for her entrepreneurial success and ability to launch a venture-backable technology-focused company in Alberta.

Amanda Hall, CEO and Founder of Summit Nanotech is advancing Summit’s vision of a clean energy future. Amanda led Summit to create the award-winning denaLi™ DLE technology to extract lithium resources economically and sustainably. In March this year, Summit Nanotech raised US$14M in their Series A round.

Awarded to a company that has raised a large amount of capital through fundraising.

Neo Financial is a Calgary-based FinTech company reimagining the banking system for all Canadians. Neo raised $185M CAD in their Series C round in May 2022. The Calgary company now ranks among the Alberta-based tech startups that can claim the coveted “unicorn” status.

Final thanks and outlook for 2023

Over the past few years, the momentum in Alberta’s tech sector has grown and Alberta is now home to more than 22,000 startup jobs, with multiple unicorns and tech businesses each with hundreds of employees. As our tech sector continues to mature, recognizing both the individuals and organizations that contribute to Alberta’s tech industry remains vital for our province to attract talent, capital, and enrich our community.

Stay connected with Start Alberta and get registered and keep your data updated in the Start Alberta database. By keeping a current, accurate pulse on the economic and innovative significance of our sector we attract talent, capital and support to grow to our full potential. Help us further the ecosystem in Alberta!

We’re still a tiny brand with big dreams and your priorities are important to us. Please help us understand more about what matters most to you.